Investigations of star and planet formation have long focused on the rich stellar nurseries of Taurus, Ophiuchus, Chamaeleon, and a handful of similarly nearby (but lower mass) molecular clouds. These regions, which lie just beyond 100 pc, are collectively host to hundreds of low-mass, pre-main sequence (T Tauri) stars with ages of a few million years and less. They hence provide large samples of stars with orbiting circumstellar disks that span a wide range of evolutionary stages.

Examples of protoplanetary disks that lie closer than ~100 pc to Earth are far fewer and farther between. However — because their proximity affords the maximum possible linear spatial resolution — these nearby disks provide unique opportunities to test theories describing the planet formation process (see http://cosmicdiary.org/geminiplanetimager/2015/09/16/what-do-we-know-about-planet-formation/). Furthermore, the T Tauri star-disk systems within 100 pc of the Sun tend to be older, on average, than the large numbers of star-disk systems that are still found in or near their natal dark clouds. Hence, circumstellar disks orbiting the nearest known young stars are particularly informative about the late stages of planet formation, as disks disperse and any planets born therein are reaching their final masses (for a brief overview of the study of nearby young stars, see 2015arXiv151000741K).

TW Hydrae was the first of these nearby T Tauri stars to be identified, and remains the best-studied such system. At just 54 pc from Earth and a ripe young age of roughly 8 million years, this nearly solar-mass star and its orbiting, circumstellar disk of dust and gas has become a “go-to” target for new imaging facilities seeking to demonstrate their capabilities. For example, TW Hya has already been the subject of a significant number of ALMA First Light and Early Science programs aimed at investigating the chemistry and structure of its 200-AU-diameter disk.

Our team’s observations of TW Hya were challenging for GPI; the star lies at the faint end of the useful range of its adaptive optics (AO) unit. But our team had successfully imaged the circumbinary disk orbiting the close binary T Tauri system V4046 Sgr with GPI (Rapson et al. 2015ApJ…803L..10R), a system very similar to TW Hya in many respects (including its I magnitude). So we had hope for TW Hya as well. 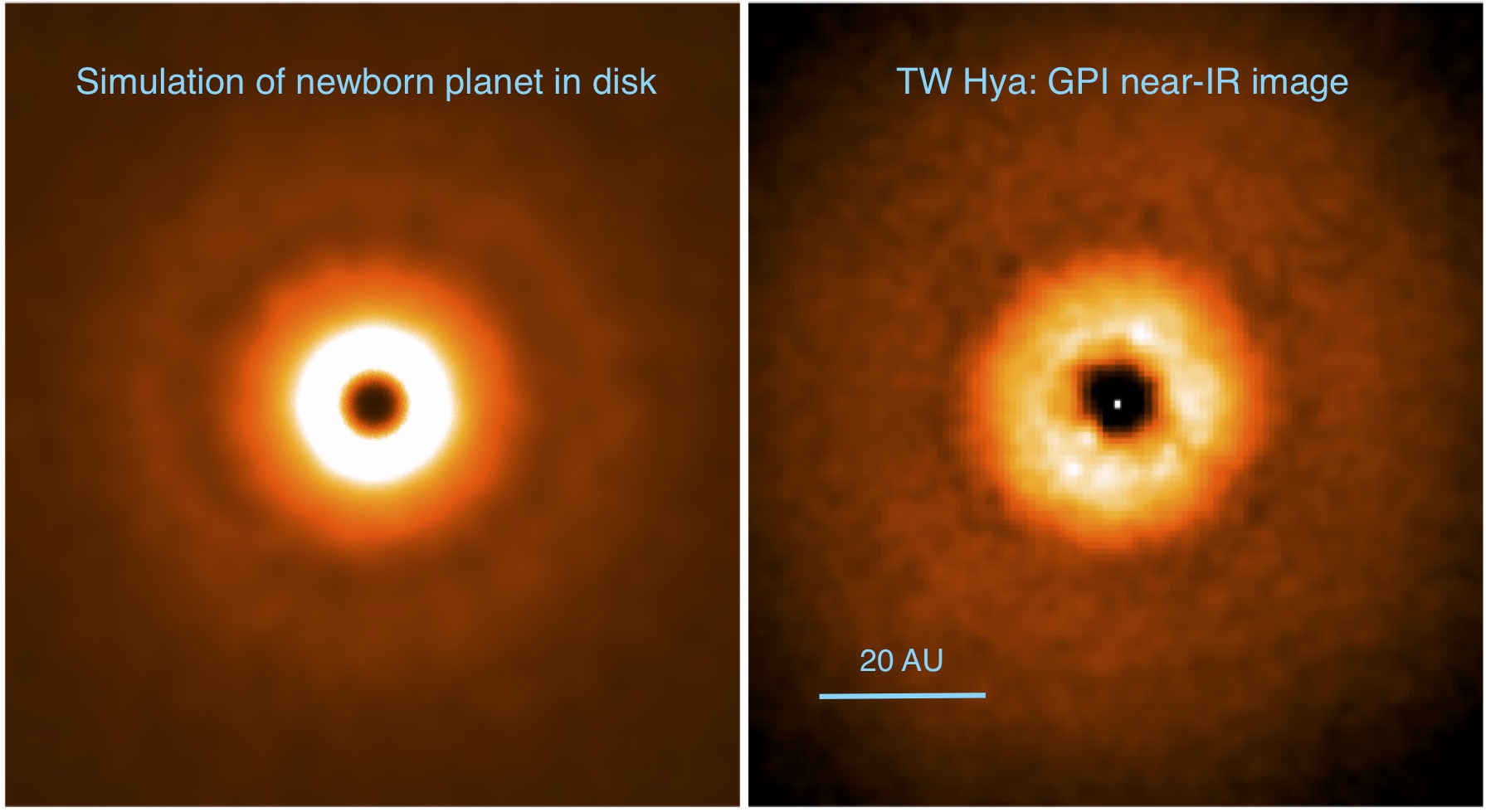 The GPI observations of TW Hya did not disappoint. These new GPI coronagraphic/polarimetric AO images confirm the presence of a dark gap in the TW Hya disk at 23 AU that was previously tentatively identified via near-infrared imaging with the Subaru telescope (Akiyama et al. 2015ApJ…802L..17A). The GPI imaging furthermore clearly resolve the disk gap, allowing us to measure its width (~5 AU) and depth (~50%) and thereby facilitating direct comparison with detailed numerical simulations of planets forming in circumstellar disks. The comparisons we have carried out thus far (see above) indicate that the 5-AU-wide gap’s observed structure could be generated by a sub-Jupiter-mass planet orbiting within the disk at a position roughly equivalent to that of Uranus in our solar system. For the gory details, see Rapson et al. (2015ApJ…815L..26).

Further scrutiny of the TW Hya disk with GPI and SPHERE in their differential coronagraphic imaging modes may yield direct detection of the planet(s) that appears to be actively carving a gap in the TW Hya disk — especially if the putative planet is still actively accreting gas from the disk. There are other possible explanations for the formation of gaps and rings in disks, however. In particular, dust grain fragmentation and ice condensation rates may change rapidly with disk radius, yielding sharp variations in small grain surface densities and/or reflective properties that can produce the appearance of disk gaps when imaged in scattered starlight. Or the inner regions of the disk may be partially shadowing exterior regions. ALMA imaging of the TW Hya disk should provide definitive tests of these alternative scenarios for the gap at 23 AU seen in our GPI imaging.