GPI Exoplanet Survey in the News

June 12, 2019, Mountain View, CA — The Gemini Planet Imager (GPI), a dedicated planet-finding instrument at the Gemini South telescope in Chile, is concluding a 4-year survey – the GPI Exoplanet Survey (GPIES) – of 531 young, nearby stars searching for giant planets. Analysis of half of the survey data to be published in The Astronomical Journal suggests that giant planets orbiting Sun-like stars, slightly more massive than Jupiter in our solar system, may be rare. GPIES is led by Stanford astronomers and includes an international team. 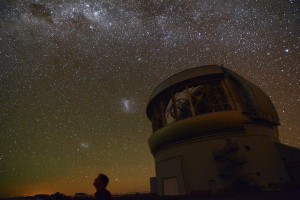 Gemini South Observatory at night, the first home of the Gemini Planet Imager and its search for exoplanets.

“We suspect that in our own solar system Jupiter and Saturn sculpted its final architecture that influences the properties of terrestrial planets like Mars and Earth, including basic elements for life like the delivery of water, and the impact rates,” said Franck Marchis, Senior researcher at the SETI Institute and a co-author of the paper. “A planetary system with only terrestrial planets and no giant planets will probably be very different to ours, and this could have consequences on the possibility for the existence of life elsewhere in our galaxy.”

The way GPI searches for exoplanets is different from the methods used in other exoplanet research. Most exoplanets discovered thus far, including those found by NASA’s Kepler spacecraft, are found via indirect methods, such as observing a dimming in the star’s light as an orbiting planet eclipses its parent star (the transit method), or by observing the star’s wobble as the planet’s gravity tugs on the star (the radial-velocity method). These methods have been incredibly successful, but mostly probe the central regions of planetary systems. Those regions outside the orbit of Jupiter, where the giant planets are located in our solar system, are usually out of their reach. GPI, however, endeavors to directly detect planets in this area of space by taking a picture of them alongside their parent stars.

Imaging a planet around another star is a difficult technical challenge reserved to a few instruments, including GPI. Planets are small, faint and very close to their host star. Distinguishing an orbiting planet from its star is like resolving the width of a dime from miles away, and even the brightest planets are ten thousand times fainter, and GPI can see planets a million times fainter than the stars they orbit. Searching for planets this way is also time consuming.

“GPI was designed and built specifically to overcome this challenge, and images from the survey are much more sensitive than those from previous generations of planet-imaging instruments,” said Bruce Macintosh, principal investigator of the project and professor at Stanford University. “The Gemini Observatory gave us time to do a careful, systematic survey. This analysis of the first 300 stars observed by GPIES represents the largest, most sensitive direct imaging survey for giant planets published to date.”

An early success of GPIES was the discovery of 51 Eridani b in December 2014, a planet about two-and-a-half times more massive than Jupiter, and orbiting just beyond the distance Saturn orbits our own Sun. The host star 51 Eridani is just 97 light-years away and is only 26 million years old (nearby and young, by astronomy standards). It had been observed by multiple planet-imaging surveys with a variety of telescopes and instruments, but its planet was not detected until GPI’s superior instrumentation was able to suppress the starlight enough for the planet to be visible.

GPIES also discovered the brown dwarf HR 2562 B, which is at a distance similar to that between the Sun and Uranus and is 30 times more massive than Jupiter. Brown dwarfs are objects that are more massive than planets, but not massive enough to fuse hydrogen into helium like stars. A longstanding question is whether these intermediate-mass objects are born more like stars or planets. Stars form from the top down, by the gravitational collapse of large primordial clouds of gas and dust, while planets are thought—but have not been confirmed—to form from the bottom up, by the assembly of small rocky bodies that then grow into larger ones, a process also termed “core accretion”.

The discoveries made by GPIES, together with its confirmation of an additional five planets and two brown dwarfs that had been detected by earlier generations of instruments, have now shed important new light on questions of formation.

“With six detected planets and three detected brown dwarfs, along with unprecedented sensitivity to planets a few times the mass of Jupiter at orbital distances beyond Saturn’s, our sample can directly answer key questions about wide-separation giant planets and brown dwarfs,” said Eric Nielsen, researcher at Stanford University, previously a postdoctoral fellow at the SETI Institute and lead author of the paper.

More Massive Stars are Over-represented as Hosts of Detected Planets

Out of 300 stars, 123 are more than one-and-a-half times more massive than our Sun. One of the most striking results of the GPI survey is that all hosts of detected planets are among these higher-mass stars, even though it is easier to see a giant planet orbiting a fainter, more Sun-like star.

The relationship between the mass of the star and the giant planet frequency suspected for years has been unambiguously confirmed by this study. The finding also appears to be consistent with the bottom-up formation scenario for planets.

Where are the Jupiters?

One of the greatest surprises that emerged in exoplanet studies has been how different other planetary systems are from our own. While our solar system has small, rocky planets in the inner parts and giant gas planets in the outer parts, we have learned from all exoplanet surveys how intrinsically uncommon giant planets seem to be around Sun-like stars, and how different other solar systems are. Extrapolation of simple models made us believe that GPI would find a dozen giant planets or more, but only saw 6. Putting it all together, giant planets may be present around only a minority of stars like our own. Although GPIES was not sensitive to low-mass planets such as Jupiter, the trends established for higher-mass planets, and in particular, their strong preference to be hosted by stars more massive than the Sun, are clues that one way in which our solar system may be atypical is Jupiter’s presence.

“If this finding is confirmed after analyzing the rest of the survey and more surveys from ground and space-based telescopes to come, it will have an impact on our understanding of the existence of life on terrestrial planets” said Marchis, “and that’s ultimately the raison d’etre of those surveys to understand how planetary system formed and what kind of life could exist elsewhere.”

GPIES observed its 531st, and final, new star in January 2019, and the team is currently following up the remaining candidates to determine which are truly planets and which are distant background stars impersonating giant planets. As this follow-up concludes, the team will move on to publishing the analysis of the entire survey and will begin an upgrade process to make GPI even more sensitive to smaller-mass, closer-in planets as it moves from Chile to Hawaii to begin a new search for planets at the Gemini-North telescope. 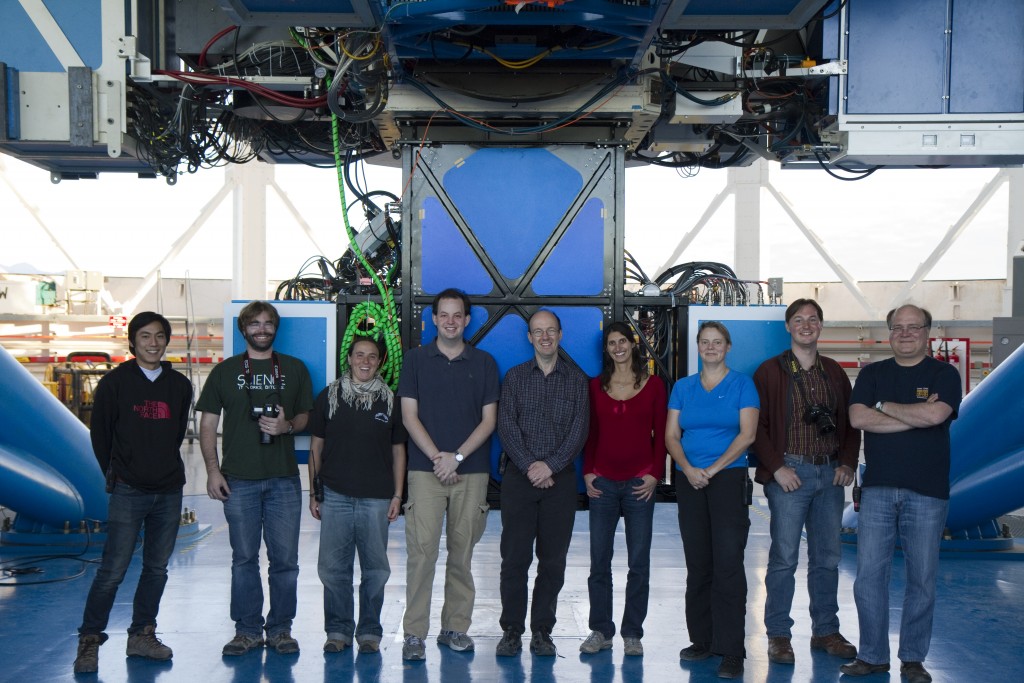 Part of the GPIES Team in front of the GPI instrument at Gemini South in Chile.

This research was based on observations obtained at the Gemini Observatory, which is operated by the Association of Universities for Research in Astronomy, Inc., under a cooperative agreement with the NSF on behalf of the Gemini partnership. It was funded by the National Science Foundation, the National Aeronautics and Space Administration, the Natural Sciences and Engineering Research Council of Canada, the National Research Council of Canada, Fonds de Recherche du Québec, the Heising-Simons Foundation, Lawrence Livermore National Laboratory, the Center for Exoplanets and Habitable Worlds.

About the SETI Institute

Founded in 1984, the SETI Institute is a non-profit, multi-disciplinary research and education organization whose mission is to explore, understand, and explain the origin and nature of life in the universe and the evolution of intelligence. Our research encompasses the physical and biological sciences and leverages expertise in data analytics, machine learning and advanced signal detection technologies. The SETI Institute is a distinguished research partner for industry, academia and government agencies, including NASA and NSF.

READ MORE NEWS ON OUR BLOG