Gemini Planet Imager Exoplanet Survey — One Year Into The Survey

The Gemini Planet Imager Exoplanet Survey (GPIES) is an ambitious three-year study dedicated to imaging young Jupiters and debris disks around nearby stars using the GPI instrument installed on the Gemini South telescope in Chile. On November 12 2015, at the 47th annual meeting of the AAS’s Division for Planetary Sciences in Washington DC, Franck Marchis, Chair of the Exoplanet Research Group of the SETI Institute and a scientist involved in the project since 2004, will report on the status of the survey, emphasizing some discoveries made in its first year.

Led by Bruce Macintosh from Stanford University, the survey began a year ago and has already been highly successful, with several findings already published in peer-reviewed journals.

“This very large survey is observing 600 young stars to look for two things: giant planets orbiting them and debris disks. In our first year, we have already found what GPI was designed to discover — a young Jupiter in orbit around a nearby star,” said Marchis. This discovery was announced in an article published in Science on Oct. 2, 2015 [http://www.sciencemag.org/content/350/6256/64], with an impressive list of 88 co-authors from 39 institutions located in North and South America. “This is modern astronomy at its best,” said Marchis. “These large projects gather energy and creativity from many groups of researchers at various institutions, enabling them to consider different strategies to improve the on-sky efficiency of the instrument and its scientific output.”

Orbital motion of 51 Eri b detected between two H-band observations taken with the Gemini Planet Imager in December 2014 and September 2015. From this motion, and additional observations of the system, the team of astronomers confirmed that this point of light below the star is indeed a planet orbiting 51 Eri and not a brown dwarf passing along our line of sight. (credit: Christian Marois & the GPIES team)

The survey was officially launched in November 2014. Eight observing runs allowed the study of approximately 160 targets, or a quarter of the sample. Other parts of the survey are more frustrating, though. Due to the incipient El Nino, weather in Chile is worse than expected, with clouds, rain, snow, and atmospheric turbulence too severe even for GPI to fix. Since late June, out of the last 20 nights that team members have spent at the telescope, they’ve only gotten a few hours of good quality data Despite this loss, over which the team of course had no control, they have already published ten peer-reviewed papers in the last year. Two of the findings are described below.

GPI data has revealed that 51 Eri b, the recently discovered Jupiter-like exoplanet around the nearby star 51 Eridani [http://www.gemini.edu/node/12403], indeed has an atmosphere of methane and water, and likely has a mass twice that of Jupiter. The team has continued to observe this planetary system, and observations recorded on Sept. 1, 2015, are most consistent with a planet orbiting 51 Eri and not a brown dwarf passing along our line of sight.

“Thanks to GPI’s incredible precision, we can demonstrate that the odds are vanishingly small that 51 Eri b is actually a brown dwarf that has a chance alignment with this star. In fact it’s five times more likely that I’ll be struck by lightning this year than future data will show this is not a planet orbiting 51 Eri” said Eric Nielsen, a postdoctoral scholar at the SETI Institute and one of the authors of the paper recently accepted for publication in the Astrophysical Journal Letters [http://arxiv.org/abs/1509.07514]. Another author of this study, SETI Research Experience for Undergraduates student Sarah Blunt, analyzed the motion of 51 Eri b and found it to be completely consistent with a planet on an approximately 40-year orbit around its host star. 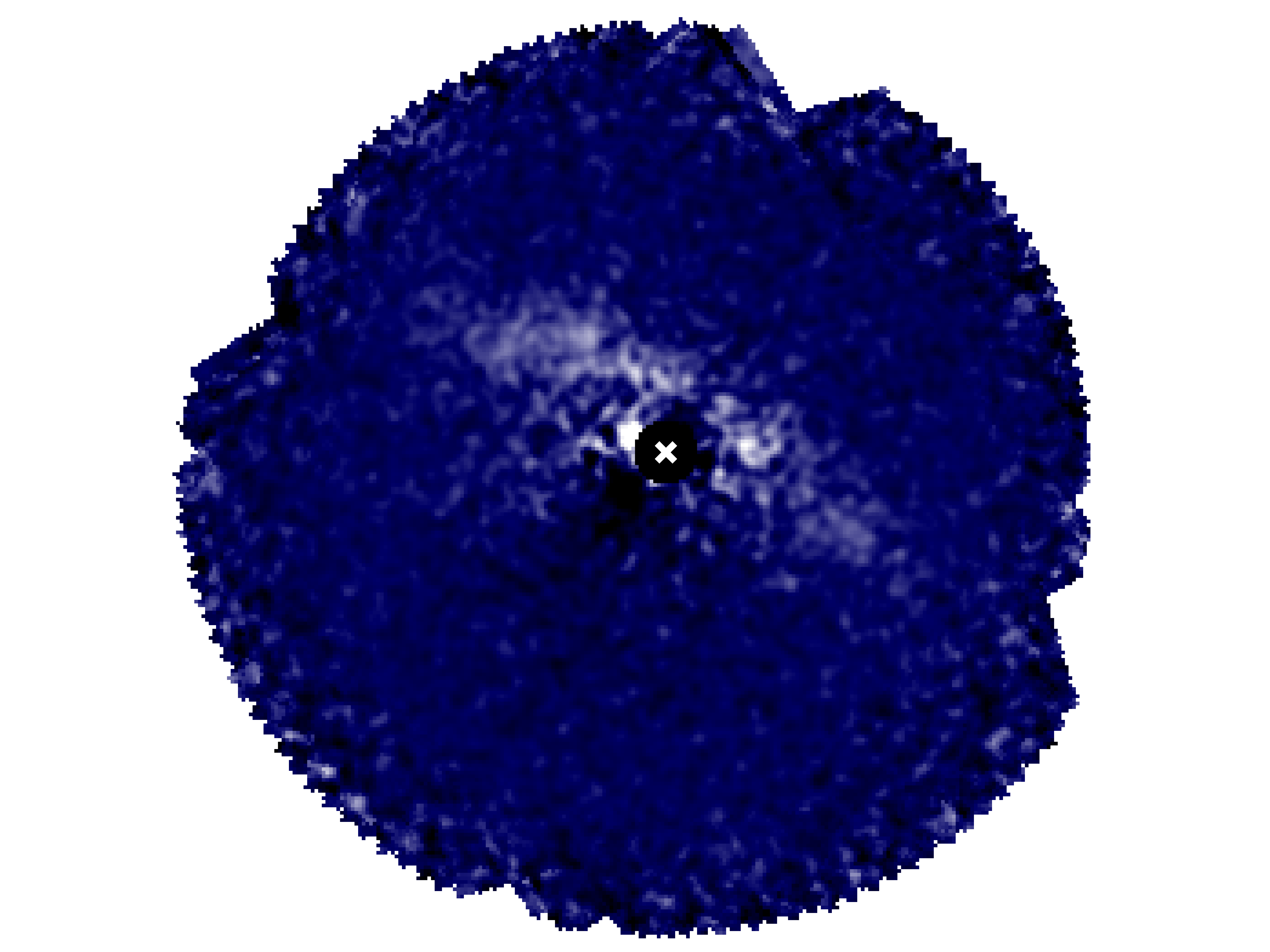 GPI detection of dust-scattered star light around HD 131835 in H-band linearly polarized intensity. The focal plane mask (filled black circle) was used to block the light from the star (white x). The stronger forward scattering makes the front (NW) side of the disk more apparent. A weaker brightness asymmetry is detected along the major axis with the NE side being brighter than the SW side. By studying resolved images of debris disks, we hope to better understand the giant planet formation and evolution environment (credits: Li-Wei Hung & the GPIES team)

The team has also discovered and imaged disks of dusty debris around several stars. Astronomers believe that these are planetary systems that are still forming their planets. Some have complex structures because they host planets and fragments of the asteroidal and cometary materials that formed those planets. One such system is HD 131835: a massive 15 Myr-old star located 400 light-years from Earth. Using GPI’s high-contrast capability, the team imaged this disk for the first time in near-infrared light in May 2015.

“The disk shows different morphology when observed in different wavelengths. Unlike the extended disk previously imaged in thermal emission, our GPI observations show a disk that has a ring-like structure, indicating that the large grains are distributed differently from the small ones. In addition, we discovered an asymmetry in the disk along its major axis. What causes this disk to be asymmetric is the subject of ongoing investigation, “ said Li-Wei Hung, a graduate student in the UCLA Department of Physics and Astronomy and lead author of the article submitted to the Astrophysical Journal Astrophysical Journal Letters. As asymmetries like the one seen in the system may be due to the gravitational influence of an unseen planet, more detailed observational study could one day confirm its existence.

As the GPIES survey enters in its second year, we are collaborating with the Gemini Observatory to continue to improve the instrument. The Gemini South telescope primary mirror was recently re-coated with silver to improve reflectivity, and the GPI instrument was equipped with a new cooling system to optimize performance.

“Continued collaboration between the Gemini Observatory and the GPIES collaboration has worked really well — we’re learning a lot about how it performs in the field and interacts with the atmosphere, and are working to make GPI an even a better instrument to see even fainter and closer planets,” said Bruce Macintosh, principal investigator of the project and professor at Stanford University.