What do we know about planet formation?

Understanding how planets form in the Universe is one of the main motivations for GPI. Thanks to its advanced design, GPI specializes in finding and studying giant planets that are similar to Jupiter in our solar system. These are the kind of planets whose origin we hope to understand much better after our survey is complete. 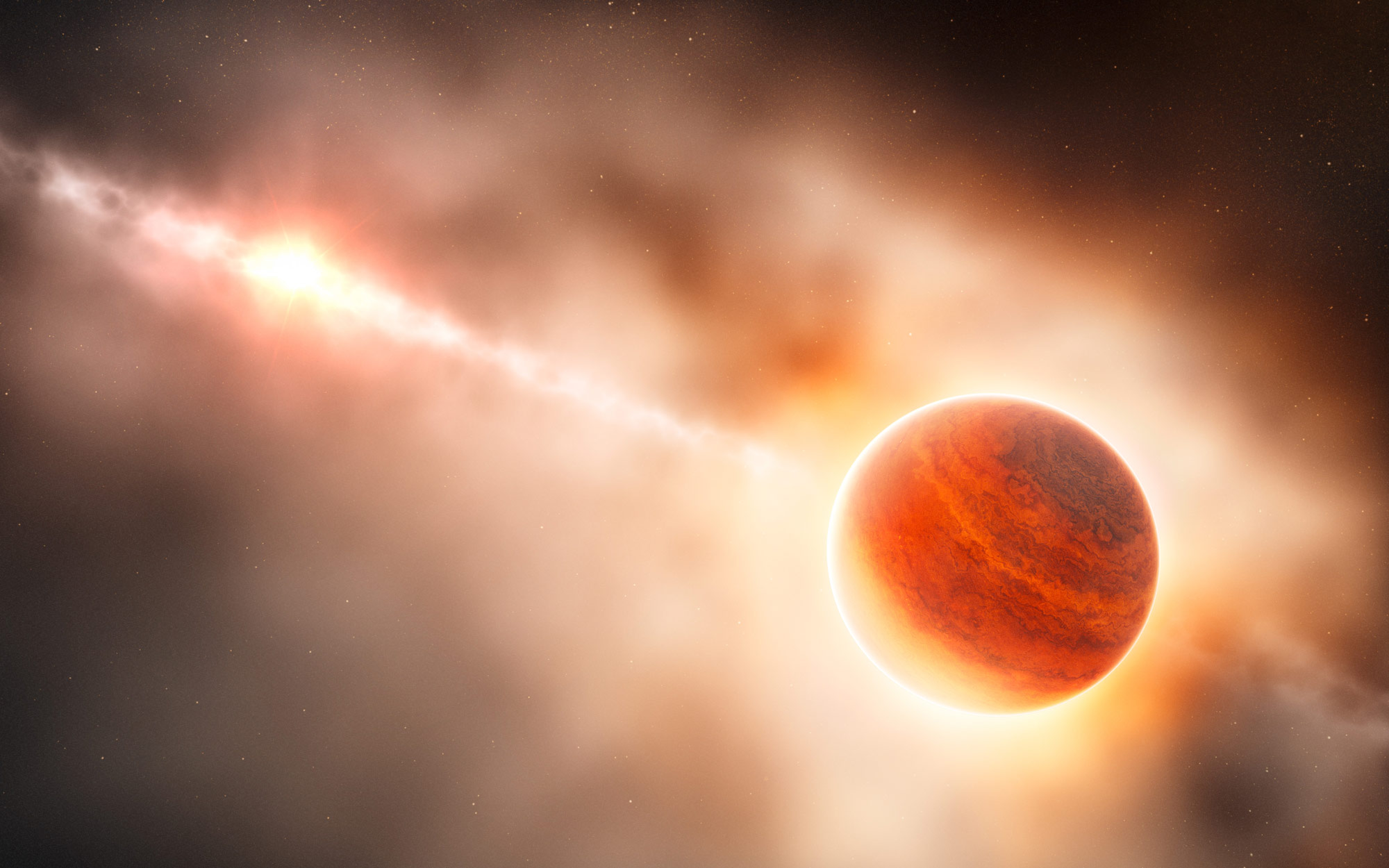 This artist’s impression shows the formation of a gas giant planet around a young star. Credit: ESO/L. Calçada

We know that planets form within protoplanetary disks that orbit young stars, and gas giants need to be fully formed within 3-10 million years of the formation of their parent star as the gaseous nebula dissipates past this point. This very important time constraint is based on statistics of observed protoplanetary disks in nearby young stellar associations such as Taurus. At present there are two main rival theories of giant planet formation — core accretion and gravitational instability, which effectively represent the “bottom up” and “top down” routes to planetary genesis.

Core accretion relies on the formation of a planetary core — a compact, massive object composed of refractory elements, similar to a terrestrial planet like Earth but typically more massive. Cores form by assembly of a large number of planetesimals — smaller asteroid-like bodies composed of rock and ice that collide with each other, merge and grow in size. This process is thought to be rather slow, especially if it happens far from the star, where the characteristic timescales, which are determined by the local orbital period, become very long. As protoplanetary cores increase their mass, their gravitational pull attracts gas from the surrounding nebula, forming atmospheres around them. Atmospheric mass increases quite rapidly, and at some point the whole gaseous envelope becomes self-gravitating. In theoretical models, this transition typically occurs when the core mass exceeds 10-20 Earth masses. Beyond this point rapid gas accretion ensues, turning the core into a giant planet in a relatively short period of time. This process is accompanied by a brief phase of high luminosity as the gravitational energy of accreted gas is radiated away. The final mass of the planet is likely to be set by how much nebular gas is available for accretion, which may be limited by the formation of a gap around the planetary orbit, or by the dispersal of the protoplanetary disk.

Gravitational instability may operate in cold, massive disks in which random gas overdensities start growing under their own self-gravity, which neither pressure nor rotational support can initially resist. If this collapse of dense regions can continue deeply into the nonlinear regime, and their density come to far exceed the nebula’s, such clumps become self-gravitating objects — and, over time, contract, cool, and look like giant planets. Theoretical arguments and numerical simulations suggest that this is possible only when the collapsing gas is able to cool rapidly. Otherwise, pressure inside the contracting clump would increase so fast that it could stall collapse. Detailed analysis shows that in gravitationally unstable disks, conditions for such rapid cooling are realized only far from the star, beyond approximately 50 AU, which is in the range of separations probed by GPI. 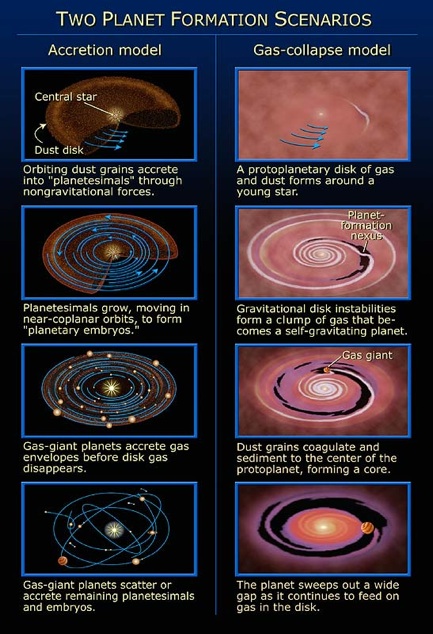 A schematic illustration of the two main theoretical channels of the giant planet formation: core accretion (on the left) and gravitational instability (on the right). Credit: NASA and A. Feild (STScI)

Both theories have their own virtues and problems. Core accretion is natural in the sense that it represents a culminating step in the formation of terrestrial planets (or massive cores). It nicely explains the overabundance of refractory elements and the presence of cores for giant planets in the solar system (although the latter is not so obvious in the case of Jupiter). It also naturally accounts for the so-called metallicity correlation — the tendency of more metal-rich stars to host a giant planet: higher abundance of metals in the nebula increases the availability of solids and speeds up core growth, facilitating core accretion. However, formation of the core is the Achilles’ heel of core accretion because it typically takes a long time. Standard theory predicts that far from the star, the core buildup by planetesimal coagulation should take much longer than the lifespan of a protoplanetary disk, which is several million years. This makes it problematic to explain the origin of directly imaged planets by core accretion at tens of AU from their stars. That’s why a number of ideas have been proposed recently for speeding up core formation, by efficient accretion of either cm- or mm-sized “pebbles” early on, or small fragments and debris resulting from planetesimal collisions at later stages.

Gravitational instability nicely bypasses the nebula-lifetime constraint as it should operate on a relatively short dynamical timescale, which is about thousands of years at 100 AU distances. However, as mentioned above, conditions for this formation channel can exist only far from the star. It also requires very massive protoplanetary disks, typically tens of percent of the stellar mass, which may not be unusual early on but is not very common in later stages. High disk mass raises a number of important issues for gravitational instability. Bound objects produced by gravitational instability are expected to have rather high initial masses (of order 10 Jupiter masses), and can easily grow from planetary mass into the brown dwarf regime by accreting from the surrounding dense nebula. Tidal coupling to a massive disk may also lead to fast migration of forming protoplanets towards the star, where they can be efficiently destroyed. 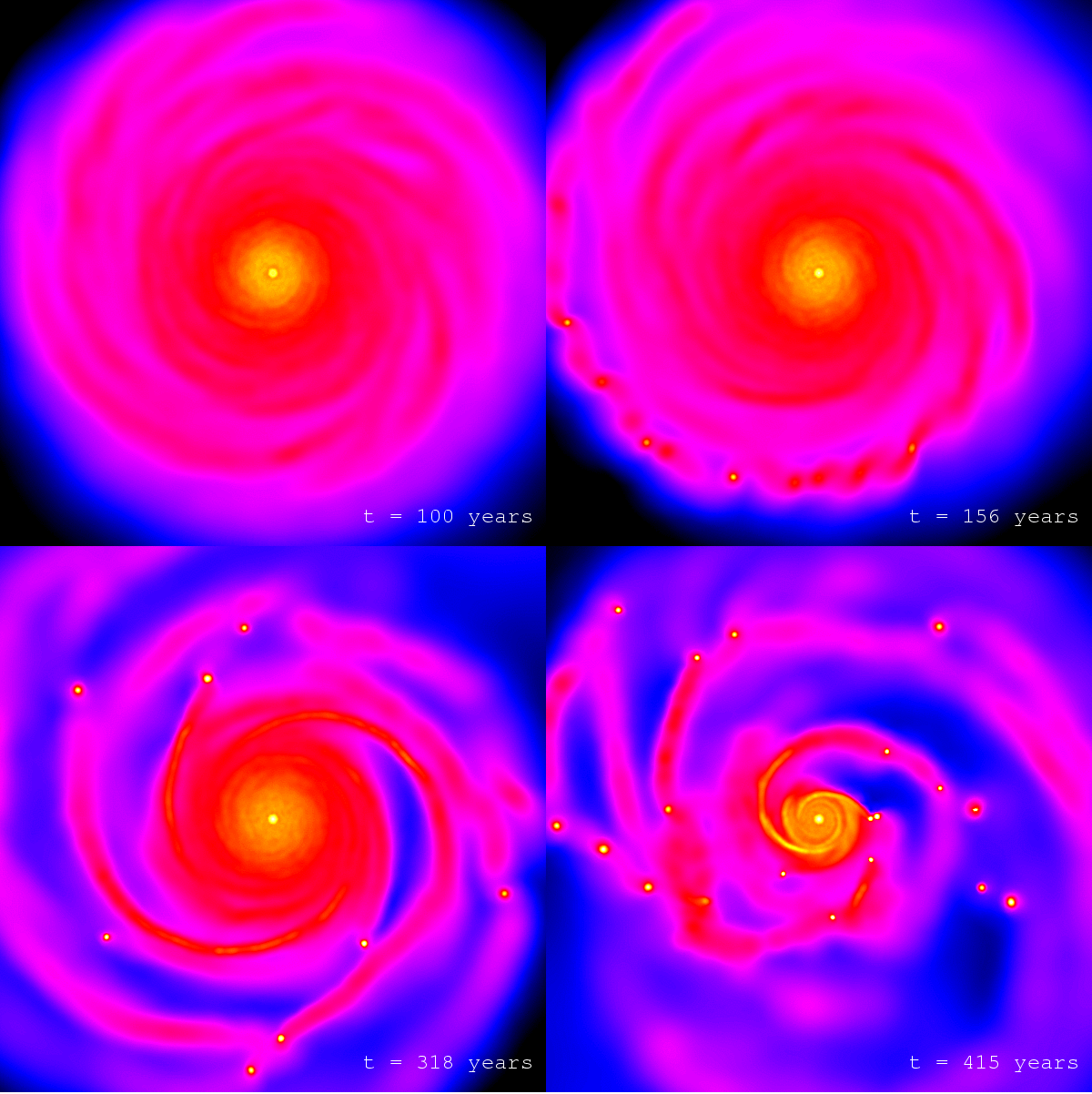 A series of snapshots from a simulation of a gravitationally unstable protoplanetary disk. Bright objects seen at late stages are the self-gravitating clumps forming as a result of gravitational instability that may subsequently turn into giant planets. Credit: G. Lufkin et al (University of Washington)

Discoveries of planets such as 51 Eri b are very important for understanding the efficiency of each of these two channels (their “branching ratios”) in producing the planets we have observed. With its small projected separation of only 13 AU and relatively low mass (possibly as low as two Jupiter masses) this object would have little problem forming by core accretion even at its current location, which is close to the orbit of Saturn in our solar system. At this stage, gravitational instability appears a more unlikely scenario for 51 Eri b. GPI and similar surveys will provide better statistics for directly imaged planets at different separations, and give us a much better understanding of how the majority of giant planets form in the Universe.