Unsensed and uncorrected non-common path wave front errors will set the limit for achievable contrast for a ground-based AO system.

These errors are particularly vexing due to their temporal evolution. If they were perfectly static, they could be measured once and then subsequently removed in post processing. If they were perfectly random, they would average out to a smooth floor over long integrations. Non-common path errors that limit contrast tend to evolve over times scales of a few minutes to 10’s of minutes and therefore must be sensed and corrected during a science observation. The main goal of the calibration system for GPI is to sense these wave front errors at the science wavelength and coronagraph FPM location and provide this measurement to the AO system so that they may be corrected. 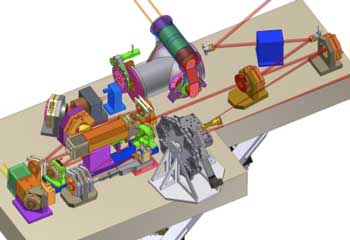 The GPI calibration unit has thirteen mechanisms with 28 degrees of freedom to configure the calibration system and compensate for dimensional changes due to structural flexure, mechanical disturbances, and thermal changes. In addition to these there are four mechanisms associated with thermal control.