These are 5-sigma contrast levels achievable with different wavefront sensor sensitivity levels and one-hour integrations. The simulations are done over two R = 45 spectral channels, where the central wavelength is 1.65 microns and SDI has been applied over the 1.579-1.624 micron region. The dramatic improvement in contrast up to about 0.2 arcsec separation is due to speckle suppression. Click on the image to magnify. 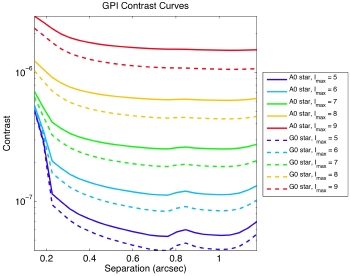 The combination of ADI (angular differential imaging) and SDI (spectral differential imaging) speckle suppression techniques greatly improves the contrast achievable with GPI. Contrast depends strongly on the performance of the wavefront sensor: for a star with a given I magnitude, a wavefront sensor that can lock on I = 9 stars will perform much better than one that requires I = 5 stars. Contrast also depends on the spectral type of the target star: since H band data will be taken, later spectral types will be brighter in H band than earlier spectral types for the same I magnitude.