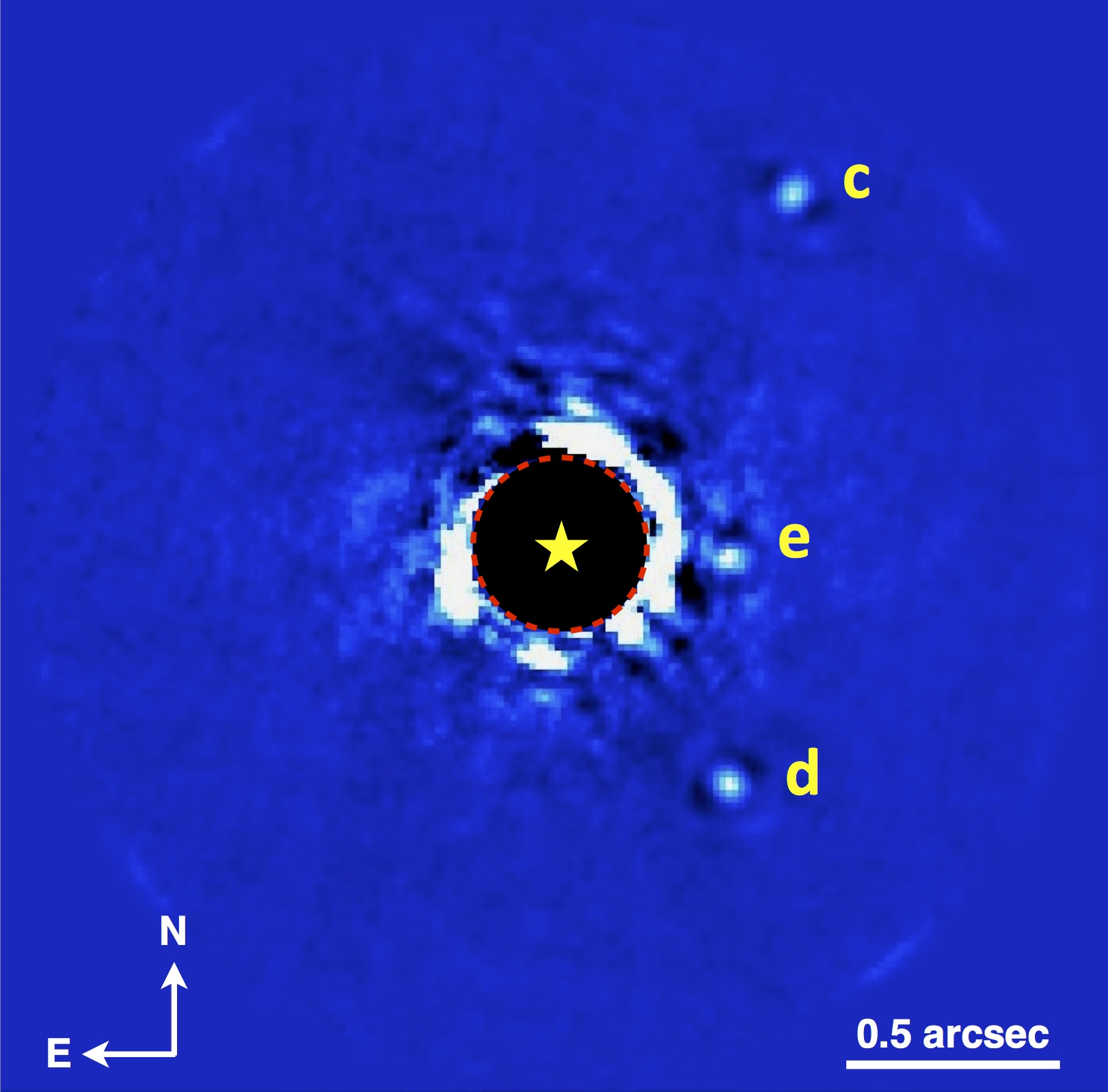 GPI imaging of the planetary system HR 8799 in K band, showing 3 of the 4 planets. (Planet b is outside the field of view shown here, off to the left.) These data were obtained on November 17, 2013 during the first week of operation of GPI and in relatively challenging weather conditions, but with GPI’s advanced adaptive optics system and coronagraph the planets can still be clearly seen and their spectra measured (see Figure 2). Image Credit: Christian Marois (NRC Canada), Patrick Ingraham (Stanford University) and the GPI Team.

For release at the American Astronomical Society meeting press confer-ence January 6, 2015, 10:15am (PST)

Stunning exoplanet images and spectra from the first year of science operations with the Gemini Planet Imager (GPI) were featured today in a press conference at the 225th meeting of the American Astronomical Society (AAS) in Seattle, Washington. The Gemini Planet Imager GPI is an advanced instrument designed to observe the environments close to bright stars to detect and study Jupiter-like exoplanets (planets around other stars) and see proto-stellar material (disk, rings) that might be lurking next to the star.

Marshall Perrin (Space Telescope Science Institute), one of the instru-ment’s team leaders, presented a pair of recent and promising results at the press conference. He revealed some of the most detailed images and spectra ever of the multiple planet system HR 8799. His presentation also included never-seen details in the dusty ring of the young star HR 4796A. “GPI’s advanced imaging capabilities have delivered exquisite images and data,” said Perrin. “These improved views are helping us piece together what’s going on around these stars, yet also posing many new questions.” 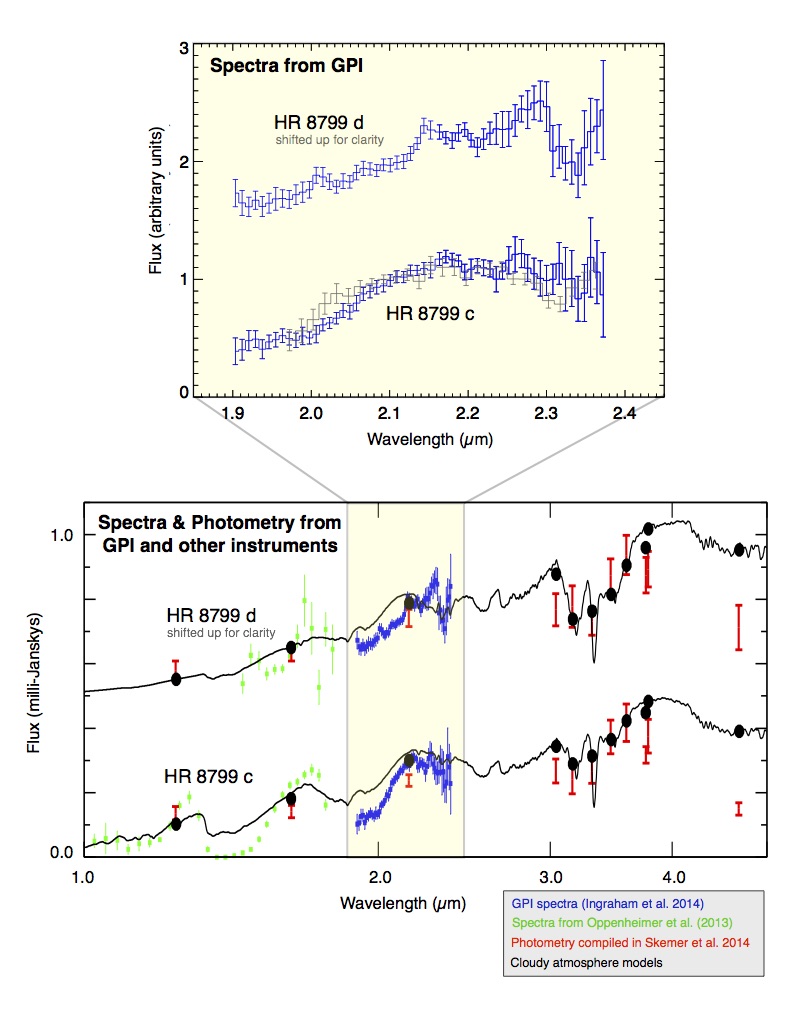 The GPI spectra obtained for two of the planetary members of the HR 8799 system presents a challenge for astronomers. GPI team member Patrick Ingraham (Stanford University), lead the paper on HR 8799. In-graham reports that the shape of the spectra for the two planets differ more profoundly than expected based on their similar colors, indicating significant differences between the companions. “Current atmospheric models of exoplanets cannot fully explain the subtle differences in color that GPI has revealed. We infer that it may be differences in the cover-age of the clouds or their composition.” Ingraham adds, “The fact that GPI was able to extract new knowledge from these planets on the first commissioning run in such a short amount of time, and in conditions that it was not even designed to work, is a real testament to how revolu-tionary GPI will be to the field of exoplanets.” 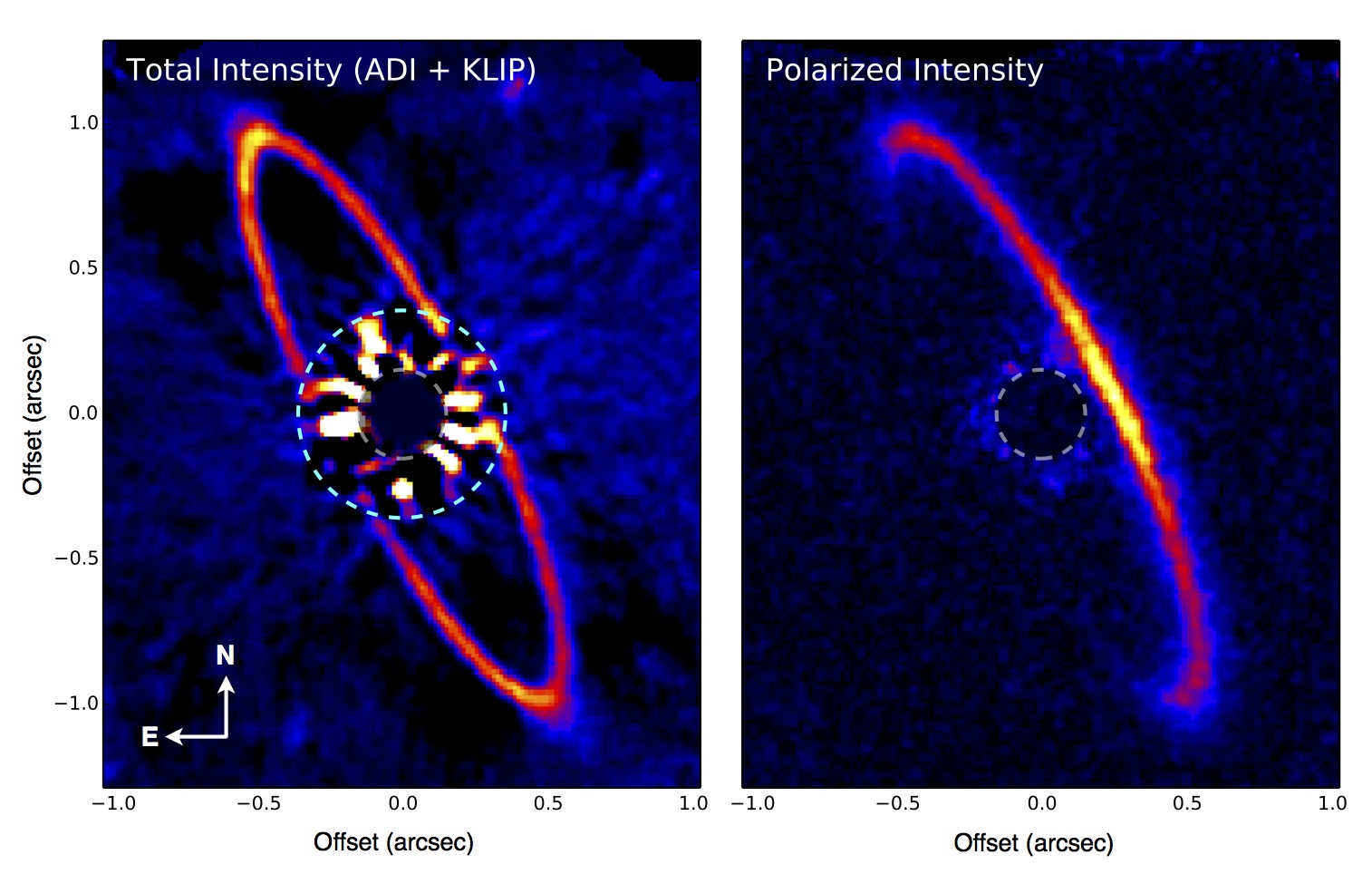 GPI imaging polarimetry of the circumstellar disk around HR 4796A, a ring of dust and planetesimals similar in some ways to a scaled up version of the solar system’s Kuiper Belt. These GPI observations reveal a complex pattern of variations in brightness and polarization around the HR 4796A disk. The western side (tilted closer to the Earth) appears brighter in polarized light, while in total intensity the eastern side appears slightly brighter, particu-larly just to the east of the widest apparent separation points of the disk. Reconciling this complex and apparently-contradictory pattern of brighter and darker regions required a major overhaul of our understanding of this circumstellar disk. Image Credit: Marshall Perrin (Space Telescope Science Institute), Gaspard Duchene (UC Berkeley), Max Millar-Blanchaer (University of Toronto), and the GPI Team.

Perrin, who is working to understand the dusty ring around the young star HR 4796A, said that the new GPI data present an unprecedented level of detail in studies of the ring’s polarized light. “GPI not only sees the disk more clearly than previous instruments, it can also measure how polarized its light appears, which has proven crucial in understand-ing its physical properties.” Specifically, the GPI measurements of the ring show it must be partially opaque, implying it is far denser and more tightly compressed than similar dust found in the outskirts of our own Solar System, which is more diffuse. The ring circling HR 4796A is about twice the diameter of the planetary orbits in our Solar System and its star about twice our Sun’s mass. “These data taken during GPI commis-sioning show how exquisitely well its polarization mode works for studying disks. Such observations are critical in advancing our under-standing of all types and sizes of planetary systems — and ultimately how unique our own solar system might be,” said Perrin. 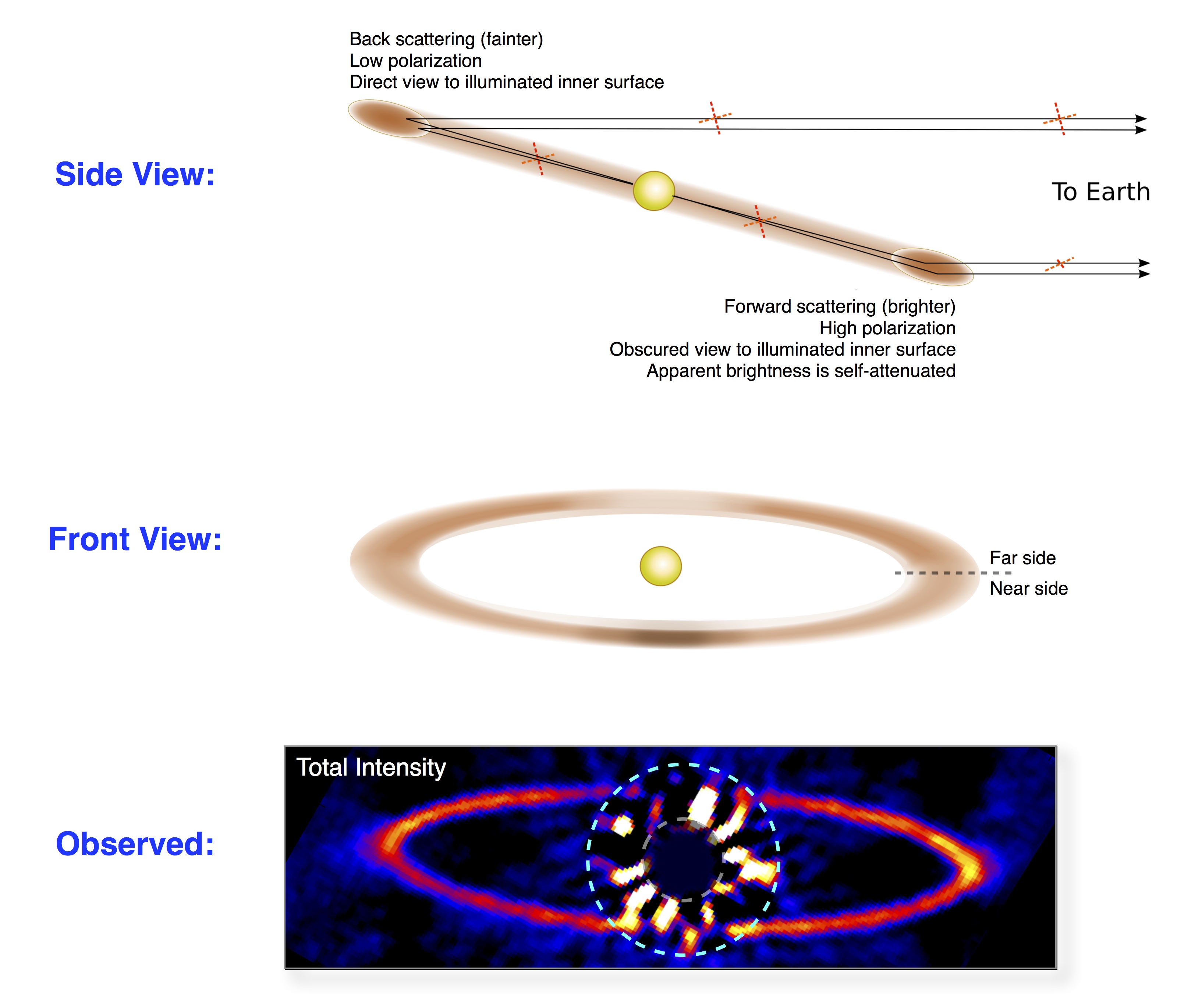 Diagram depicting the GPI team’s revised model for the orientation and composition of the HR 4796A ring. To explain the observed polarization levels, the disk must consist of relatively large (> 5 µm) silicate dust parti-cles, which scatter light most strongly and polarize it more for forward scat-tering. To explain the relative faintness of the east side in total intensity, the disk must be dense enough to be slightly opaque, comparable to Sat-urn’s optically thick rings, such that on the near side of the disk our view of its brightly illuminated inner portion is partially obscured. This revised model requires the disk to be much narrower and flatter than expected, and poses a new challenge for theories of disk dynamics to explain. GPI’s high contrast imaging and polarimetry capabilities together were essential for this new synthesis. Image Credit: Marshall Perrin (Space Telescope Science Institute).

During the commissioning phase, the GPI team observed a variety of targets, ranging from asteroids in our solar system, to an old star near its death. Other teams of scientists have been using GPI as well and al-ready astronomers around the world have published eight papers in peer-reviewed journals using GPI data. “This might be the most produc-tive new instrument Gemini has ever had,” said Professor James Graham of the University of California, who leads the GPI science team and who will describe the GPI exoplanet survey (see below) in a talk scheduled at the AAS meeting on Thursday, January 8th.

The Gemini Observatory staff integrated the complex instrument into the telescope’s software and helped to characterize GPI’s performance. “Even though it’s so complicated, GPI now operates almost automati-cally,” said Gemini’s instrument scientist for GPI Fredrik Rantakyro. “This allows us to start routine science operations.” The instrument is now available to astronomers and their proposals are scheduled to start observing in early 2015. In addition, “shared risk” observations are al-ready underway, starting in November 2014.
The one thing GPI hasn’t done yet is discovered a new planet. “For the early tests, we concentrated on known planets or disks” said GPI PI Bruce Macintosh. Now that GPI is fully operational, the search for new planets has begun. In addition to observations by astronomers world-wide, the Gemini Planet Imager Exoplanet Survey (GPIES) will look at 600 carefully selected stars over the next few years. GPI ‘sees’ planets through the infrared light they emit when they’re young, so the GPIES team has assembled a list of the youngest and closest stars. So far the team has observed 50 stars, and analysis of the data is ongoing. Discov-ering a planet requires confirmation observations to distinguish a true planet orbiting the target star from a distant star that happens to sneak into GPI’s field of view – a process that could take years with previous instruments. The GPIES team found one such object in their first survey run, but GPI observations were sensitive enough to almost immediately rule it out. Macintosh said, “With GPI, we can tell almost instantly that something isn’t a planet — rather than months of uncertainty, we can get over our disappointment almost immediately. Now it’s time to find some real planets!”
Science Contacts:

The Gemini Planet Imager (GPI) instrument was constructed by an international col-laboration led by Lawrence Livermore National Laboratory under Gemini’s supervi-sion. The GPI Exoplanet Survey (GPIES) is the core science program to be carried out with it. GPIES is led by Bruce Macintosh, now a professor at Stanford University and James Graham, professor at the University of California at Berkeley and is de-signed to find young, Jupiter-like exoplanets. They survey will observe 600 young nearby stars in 890 hours over three years. Targets have been carefully selected by team members at Arizona State University, the University of Georgia, and UCLA. The core of the data processing architecture is led by Marshall Perrin of the Space Tele-scope Science Institute, with the core software originally written by University of Montreal, data management infrastructure from UC Berkeley and Cornell University, and contributions from all the other team institutions. The SETI institute located in California manages GPIES’s communications and public outreach. Several teams lo-cated at the Dunlap Institute, the University of Western Ontario, the University of Chicago, the Lowell Observatory, NASA Ames, the American Museum of Natural His-tory, University of Arizona and the University of California at San Diego and at Santa Cruz also contribute to the survey. The GPI Exoplanet Survey is supported by the NASA Origins Program NNX14AG80, the NSF AAG program, and grants from other institutions including the University of California Office of the President. Dropbox Inc. has generously provided storage space for the entire survey’s archive.

About Gemini Observatory:
The Gemini Observatory is an international collaboration with two identical 8-meter telescopes. The Frederick C. Gillett Gemini Telescope is located on Mauna Kea, Ha-wai’i (Gemini North) and the other telescope on Cerro Pachón in central Chile (Gem-ini South); together the twin telescopes provide full coverage over both hemi-spheres of the sky. The telescopes incorporate technologies that allow large, rela-tively thin mirrors, under active control, to collect and focus both visible and infra-red radiation from space.

The Gemini Observatory provides the astronomical communities in six partner countries with state-of-the-art astronomical facilities that allocate observing time in proportion to each country’s contribution. In addition to financial support, each country also contributes significant scientific and technical resources. The national research agencies that form the Gemini partnership include: the U.S. National Sci-ence Foundation (NSF); the Canadian National Research Council (NRC); the Brazil-ian Ministério da Ciência, Tecnologia e Inovação (MCTI); the Australian Research Council (ARC); the Argentinean Ministerio de Ciencia, Tecnología e Innovación Pro-ductiva; and the Chilean Comisión Nacional de Investigación Cientifica y Tecnológica (CONICYT). The Observatory is managed by the Association of Universities for Re-search in Astronomy, Inc. (AURA) under a cooperative agreement with the NSF. The NSF also serves as the executive agency for the international partnership.