The planets that we are familiar with in our own solar system have evolved, aged, and cooled, for over 4.5 billion years since the Sun and planets formed. What do planets look like at younger ages? Can we use the light that a planet emits to understand its past history?

When we look at a planet like Jupiter with our eyes, the light that we see is Sunlight that is reflected back to us at Earth, scattered by clouds and gasses in the planet’s atmosphere. But what would Jupiter look like if we instead could see only its thermal “heat” emission, far beyond the visible spectrum? We can use infrared light detectors on telescopes to see this thermal emission, which comes from the deep interior below the visible clouds. We can use this light to precisely “take Jupiter’s temperature” in a way that you can’t do with reflected Sunlight. It turns out that our 4.5 billion-year-old planets are cold enough that their thermal “heat” radiation is quite small. We can only detect it because we are so close by. 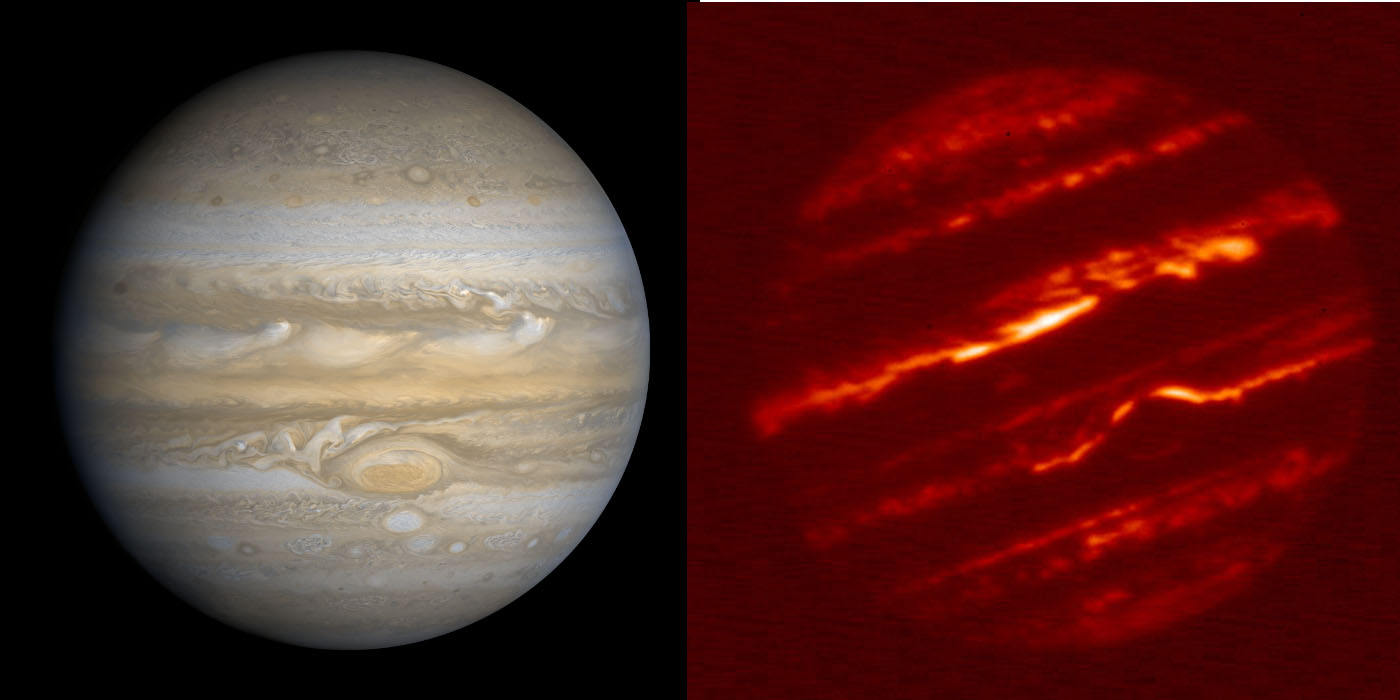 But that wasn’t always the case. Planets start their lives hot. In our current understanding of planet formation, making a planet is a tremendously energetic event. For Jupiter-like giant planets, hundreds of Earth masses of hydrogen dominated gas is pulled via gravity from large distances within the planet-forming nebula, down onto a large “seed core” of ice and rock. The kinetic energy of this moving gas becomes trapped in the opaque planet interior and is converted into thermal (heat) energy within the planet. A young Jupiter, right after formation, might be 10 times hotter in temperature, and over 10,000 times brighter in infrared radiation. These young planets are hot, bright, and much easier to see.

But like an ember that cools after being ejected from the fire, so do planets cool off over time. Trying to understand the specifics of how fast this cooling occurs, and how that impacts the planetary properties that we see, is one of the main reasons that GPI was built.   The interior energy that slowly flows through the planet’s atmosphere, out into space as infrared light, wanes over time, so the atmosphere we see cools and changes.

The atoms and molecules we expect to see in these atmospheres depend strongly on temperature. Three of the most abundant molecules are water vapor (H2O), carbon monoxide (CO), and methane (CH4). These molecules all absorb light at infrared wavelengths, so they are easy for GPI to see. When atmospheres cool, they also form clouds. Earth’s clouds are made of water and Jupiter’s clouds are made of ammonia (NH3). But warmer gas giant planets can have much stranger clouds. The hottest planets will have clouds made of iron droplets and rock dust. Cooler planets, like a middle-aged Jupiter, should have clouds of salt (KCl) and sodium sulfide (Na2S). What we don’t yet know is how thick these clouds are, and if they form all over the visible atmosphere. 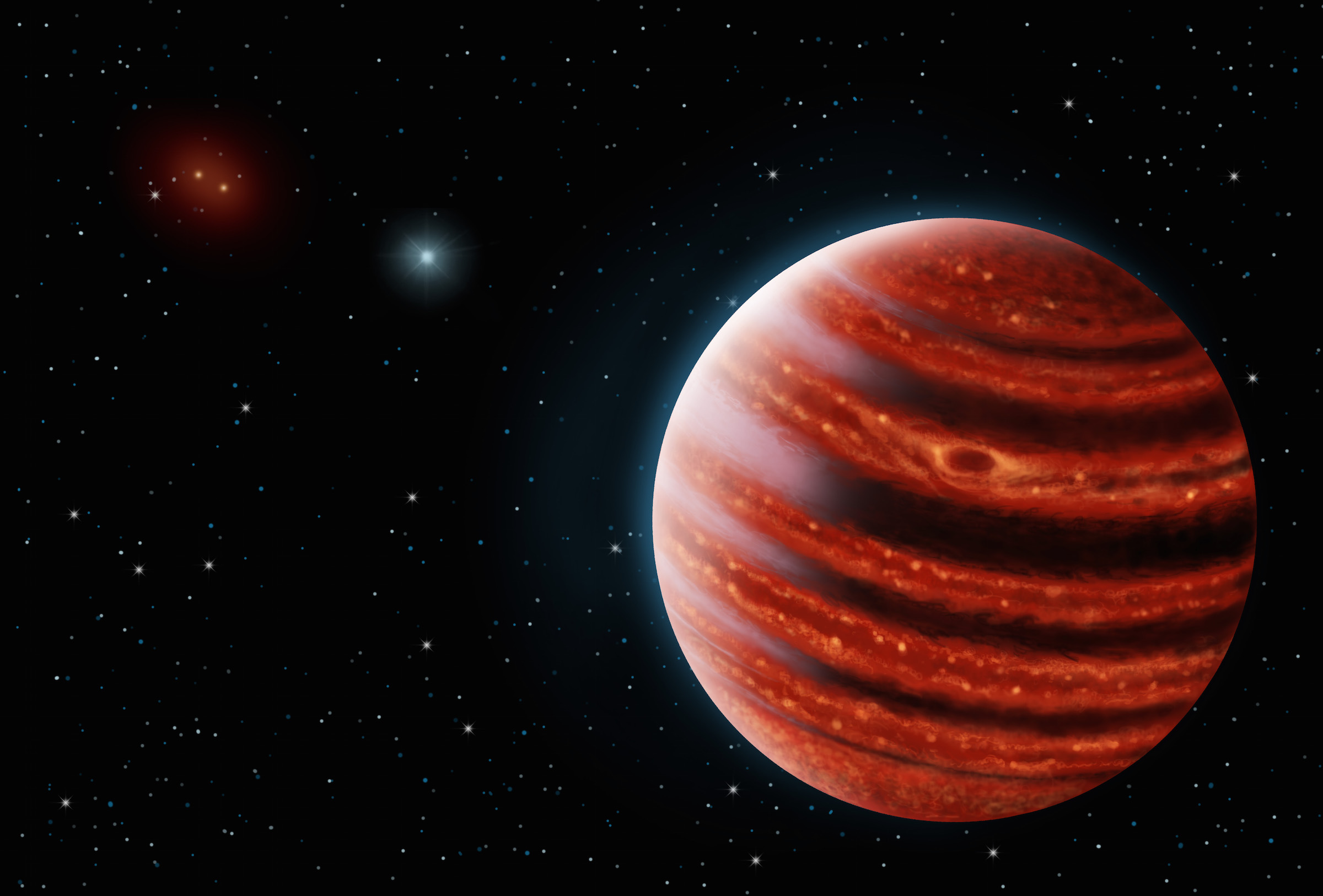 This rendering shows a possible view of a young Jupiter-like planet, 51 Eri b. It is glowing in thermal emission and shown as being partly cloudy.

We expect to see significant differences between very young planets, and those that are cooler and more middle-aged. As mentioned above, their temperatures and atmospheres change over time, but even the sizes of the planets changes. When their interiors cool off, the hydrogen gas contracts and the planets shrink. We’re using GPI to understand how this planetary cooling and shrinking process works, for planets at different ages.

Could we detect a young, hot rocky planet, like a young Earth? That will be possible in the future, but is beyond the reach of GPI. Such planets are much harder to see than young gas giants because of their much smaller sizes. They just don’t put out as much infrared light. It also might be difficult to recognize such a planet if we saw it, because we have little intuition for what such a planet might look like. Its atmosphere might be made of a mix of water vapor, CO2, and some gaseous components from vaporized rocks. Work for the future!

What do we know about planet formation?